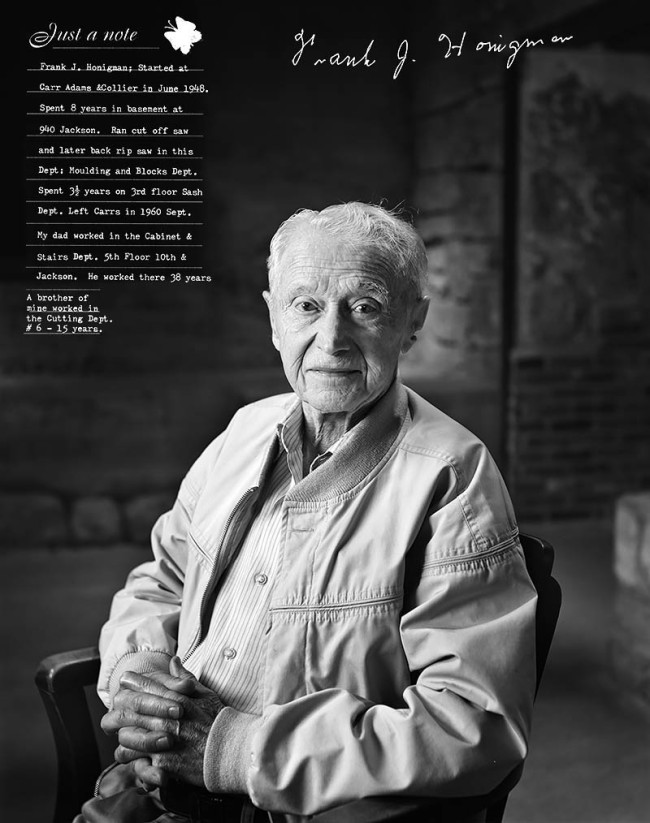 I graduated from Senior High School in 1948 and started at Caradco a week or two later. My father was working here then—he worked here thirty-eight years in the cabinet department. And then I had another brother and he worked here for about twelve years—twelve or fifteen years—over in the cutting room over in this other block on Washington. My dad came over from Austria in 1907. His name was Frank—he had the same name. He worked first for a farmer in Cascade, then he had a job for a while at Farley & Loetscher. He started at Carr, Adams & Collier in 1920. He used to work on staircases—they said they made a stairway for Mrs. Perkins who was Secretary of Labor in Roosevelt’s cabinet. That was back in the ‘30s, you know. My dad retired in 1957 or ‘58. He was sixty-eight years old. In them days they didn’t have the big pensions and that. I think my dad got $60 a month for five years and then that run out. My dad, I bet he never made more than $5,000 a year down here. But in them days a dollar was worth more, you know.

I started at 88¢ an hour. I ran a back rip-saw. I did that for six years or something. I worked right down here in this other room cutting them boards different widths, you know, and then they went up to cut stock. In 1950 we went out on strike for seventeen weeks and we went back for a two-cent raise. We never had many strikes here, though. Farley & Loetscher had a couple more than we did, I think.

When I quit I was probably making about $1.70 or something. I got a job at the post office in 1960—they were paying $2.80 at that time. I was only there ten months. I should’ve stayed on. Now they’re makin’ forty-five, fifty thousand, you know. But I worked there for ten months and then quit and went to the Pack. I worked there twenty-four years.

I liked it at Caradco, yeah. A lot of good people worked here, just like when I worked at the packing house. And a lot of good people worked there, you know. I think that the employees had a pretty good relationship with the management. Mr. Wendt was the president when I worked here—Lester Wendt. I never saw the guy, but his son was a year behind me at Senior High School. Dick Wendt. Do you know him? He give thirty-two million to the University of Dubuque. Yeah, they treated us pretty good. We had a banquet twice a year, Tim, for the softball and basketball team out at the Chateau, that was out on the north end. Back in them days they had a YMCA industrial basketball and softball league, and some of us younger guys played there.

I knew a lot of people who worked at Caradco because a lot of us lived right around this neighborhood. We lived about five blocks away, down on Elm Street. My dad never had a car, he just walked to work. I still live down on Elm Street yet.